We sadly announce the loss of Janina Józwiak, our past President and a leading personality in the advancement of population research in Europe, as well as in her country and her own institutions.

Janina was intensely involved in EAPS not only as a member of the Council (1995-1999), as Vice-President (1999-2003) and as President (2003-2008) but also in numerous other activities she was a wonderful colleague and a great friend for all of us. Despite her illness Janina stayed actively involved in EAPS as Honorary President until very recently.

She passed away in Warsaw on 19 July 2016. We share our deepest sympathies with her family and closest friends.

Janina, we will miss you so much, but we will always keep your example alive.

The Council of EAPS 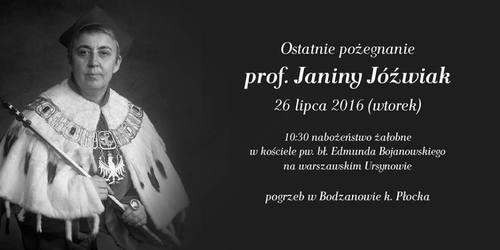